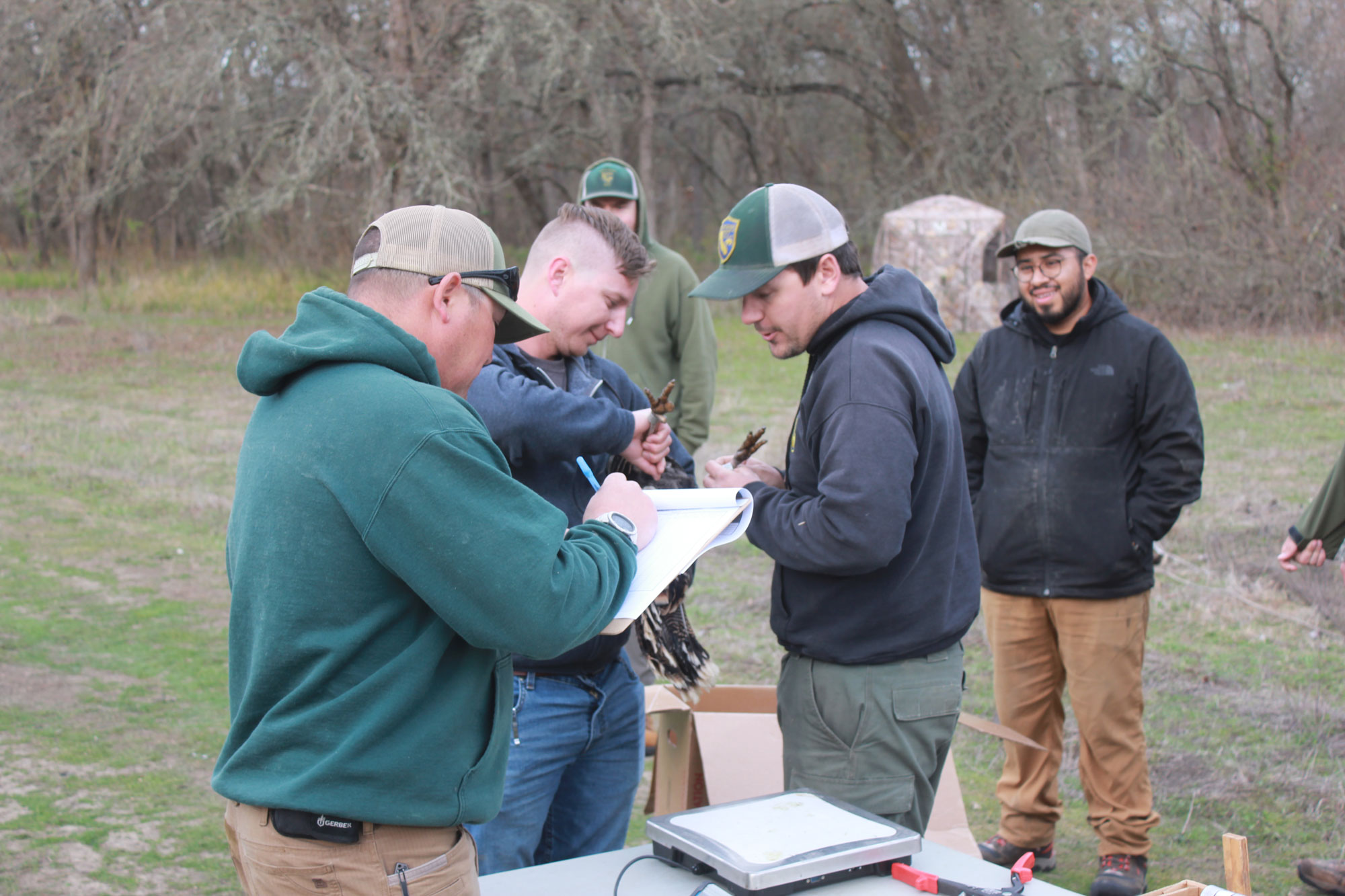 Grounded in Science, Energized by Research

The NWTF is dedicated to the conservation of the wild turkey, and our grassroots efforts are built on a foundation of science to guide research and our conservation programs across the country.

The NWTF is concerned about declines in wild turkey populations in several parts of turkey country. The causes for these declines are not fully understood, and many complexities exist. Loss of habitat, landscape fragmentation, poor land management decisions, land use changes, flooding, extreme fires, predation, disease, over harvest, and/or other external natural occurrences are some of the key concerns. The NWTF is committing significant resources to better understand the cause(s)for declines in some turkey populations. The following are a few examples of ongoing or recently completed research projects aimed at better understanding the wild turkey and its future needs.

In 2021, the NWTF, Missouri Department of Conservation and the University of Missouri launched a 5-year research project in Putnam County to closely examine the potential causes of declining turkey populations. Recent nest success rates are the lowest ever recorded since monitoring efforts began in 1959. Lead researcher Reina Tyl with the MDC will monitor turkeys outfitted with GPS transmitters through the breeding, nesting and brood-rearing seasons. Low poult survival rates or adult recruitment appears to be a major influence on declining turkey populations and researchers hope to determine the cause(s). Tyl said staff would also band about 250 to 300 males for three consecutive winters in two Turkey Monitoring Units south of the Missouri River. The leg bands will be black instead of the typical plain aluminum to make them less visible.

The NWTF is also assisting the state wildlife agency with a “gobbling chronology” project. Acoustic recorders are placed in important turkey habitats during spring to record gobbling activity, which is closely linked to breeding behavior. Biologists understand that hunting pressure at the wrong time may have adverse impacts on breeding behavior. Ultimately, the data will be used to help establish hunting season dates that will maximize both hunter satisfaction and turkey reproduction.

The NWTF provided assistance to a research project between 2015 and 2020 in the state of Alabama. The goal of the effort was to determine current survival, harvest and recruitment rates of wild turkeys, assess factors that might be influencing turkey populations and develop a tool to help guide management decisions. The study included an examination of land use changes and potential impacts to turkey populations.

The NWTF is supporting ongoing research conducted by state wildlife agencies in Tennessee and Kentucky. By trapping and banding wild turkeys and then monitoring the number of banded birds harvested by hunters, researchers can get a better handle on harvest rates, survival rates and potential variables that influence turkey abundance. The research will also include disease testing.

The NWTF assisted with a project between 2018 and 2020 with a goal of achieving a better understanding of turkey harvest and survival rates, and to develop a solid foundation for developing future harvest management decisions. Almost 900 turkeys were captured and banded, with many turkeys also receiving a transmitter for monitoring purposes. Turkeys were also tested for various diseases known to impact survival.

A recent research project the NWTF helped fund, conducted by Dr. Nicole Frey of Utah State University, substantiated that wild turkeys continue to use riparian, or streamside, areas after removal of invasive species; in fact, wild turkeys use it more after it has been managed. In addition to providing great habitat for both land and aquatic species, riparian areas serve many other functions, including controlling erosion, filtering excess nutrients from surface runoff, preventing flooding, improving water quality, providing for community water supplies and recharging underground aquifers. From 2018 to 2020, Frey conducted her research along the Escalante River drainage and the adjacent lands in southern Utah, an area where the invasive Russian olive was removed along riparian areas. Frey and her team caught wild turkeys each year for the duration of the project and attached telemetry backpacks to track their movements and habitat usage. The NWTF Utah State Chapter paid for all the technician monitoring labor. Research showed that turkeys continued to use the managed areas near waterways, indicating that the work improved habitat for cover and foraging.

At northern California’s Upper Butte Basin Wildlife Area, the NWTF and the California Department of Fish and Wildlife partnered from 2014 to 2020 to conduct wild turkey population research and open 4,900 acres to turkey hunting. The NWTF received funding for the project through the state’s Upland Game Bird Stamp Account. The work included a five-year trap-and-banding project to acquire data and monitor the effects of a new spring turkey hunting season at the wildlife area, which became the most popular turkey draw in the state after several years of management and study. The project was so successful, a coordinator position and research became part of the CDFW budget moving forward.

Survival and reproduction in South Dakota

The NWTF assisted with a project between 2018 and 2020 with a goal to acquire updated survival and reproductive rates for hen turkeys in order to develop a female-based population model and determine factors that drive turkey populations in northeast South Dakota.

The North Dakota Game and Fish Department has plans to begin research in 2022 with the University of North Dakota to study translocated turkeys removed from private properties. The project will focus on transported wild turkey movement, survival and reproduction on wildlife management areas, as well as benefits to landowners once the birds are translocated. The NWTF North Dakota State Chapter has allocated Super Fund dollars toward the project, which is tentatively scheduled to run through 2024.

Mossy Oak recently renewed its support of the National Wild Turkey Federation, signing a five-year agreement that includes a pledge of $375,000 to strengthen the NWTF’s wild turkey research projects and initiatives throughout the country.

“The NWTF will work with conservation agencies, non-governmental organizations, and universities to develop, review, direct and ultimately invest in wild turkey research to further the conservation of the wild turkey,” said NWTF Director of Conservation Services Mark Hatfield. “Mossy Oak’s support will maximize our ability to match funds with other entities to expand projects. Research is foundational to the NWTF, and we appreciate Mossy Oak’s investment in this important portion of our mission.”

Mossy Oak has been the exclusive camouflage partner of the NWTF since 2016, with its Obsession pattern being the official camouflage of the NWTF. As official convention sponsor, Mossy Oak supports numerous aspects of the NWTF’s annual gathering celebrating a year of conservation successes. Mossy Oak will continue to sponsor the annual $10,000 NWTF National Dr. James Earl Kennamer Academic Scholarship recognizing an NWTF JAKES member who is currently a senior high school student.

“Our continued partnership with NWTF is first and foremost about conservation and caring for the birds we love so much, but it’s also been mutually beneficial for the growth of turkey hunting and product offerings to aid that pursuit,” said Toxey Haas, founder and CEO of Mossy Oak. “

How You Can Help

The NWTF is determined to figure out why turkey populations are declining across many parts of turkey country. Is it habitat conditions? Poult survival? Predators? Farming practices? Hunting pressure? Diseases? Something else? The reasons likely vary in different geographies. The NWTF is launching several efforts focused on gaining a better understanding of the reasons that populations are declining, which will allow us to modify our conservation programs to address these challenges and once again restore abundant and healthy turkey populations across the country.

Consider making a significant donation to the NWTF to support our new and ongoing science and research efforts. The NWTF now has more tools at our disposal than ever before and can do a better job in targeting and expanding the scale of future research. We can use GIS to overlay habitats, populations and opportunities as we plan future wild turkey management. Advances in satellite technology now allow us to pinpoint locations of monitored birds using lightweight GPS transmitters. With your help, we can gain the essential knowledge we need to better protect and manage critical habitats important to sustaining healthy populations of wild turkeys.

The NWTF began making financial contributions toward wild turkey research in 1977 with an initial $2,900 contribution to Dr. Bill Healy to investigate wild turkey reproduction, poult survival, and movements of populations and general habitat types. Since 1977, that initial investment has grown to over $8.3 million (Super Fund: $2,980,774; National: $5,340,160) and has been leveraged a minimum of three times, resulting in an excess of $33 million dollars for wild turkey research over the past 42 years.